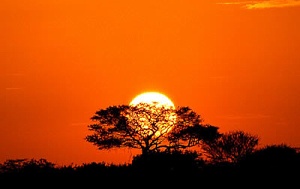 My first view of Africa came from 37,000 feet. On a cloudless afternoon, our KLM flight from Amsterdam crossed into Libyan airspace near the coastal town of Benghazi, where the deep blue of the Southern Mediterranean meets the tan of the Sahara Desert. The vast, monochromatic surface was broken only by reddish-brown veins that snaked like rivers, but were more likely dried riverbeds.

In an hour or so, we were above Egypt, the land of the Pharaohs and the Great Pyramids. When I studied American history in school, I feared the sheer weight of it all would crush me. That was quickly put into perspective during my first trip to Europe, with its layer upon layer of ages and eras, dynasties and empires.

But below our plane, in the Nile Valley to the east, an ancient civilization thrived thousands of years before the Holy Roman Empire. And in Tanzania, where my wife and son and I, along with two family friends, would land later that night for an 11-day safari with Tauck World Discovery, archaeologists tell us that humanlike creatures walked the Earth 2 million years before recorded time. 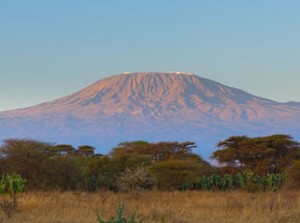 The plane darted across the southwestern region of Egypt entirely over the desert, passed into Sudan and flew over Khartoum. We crossed the equator in Kenya and continued south as the sun set over East Africa. We were well into our descent when an almost unbelievable sight loomed out my window -- 19,400-foot-tall Kilimanjaro, Africa's tallest peak and the world's tallest freestanding mountain. It towered over everything in sight, including our plane at 10,000 feet, an enormous black hulk silhouetted against a darkening horizon.

Upon landing, we were met by our Tauck representative, a friendly Tanzanian named Samuel, just outside customs. We piled into an extended Toyota Land Cruiser and left the lights of the tiny airport behind, headed for Arusha.

We were immediately engulfed in total darkness, as there were no streetlights or buildings of any kind. Samuel pointed to a lone white "cloud" in the sky, illuminated by the stars. "Look close," he said, "those are actually the snows of Kilimanjaro." We could hardly believe there was a mountain in front of us tall enough to support the snowcap we had mistaken for a cloud.

As we drove, our headlights frequently illuminated people walking on both sides of the road. In a country with a per capita annual income of $700, few people own vehicles, and there is always pedestrian traffic along the roads.

After 45 minutes, we left the pavement for a dirt road with deep potholes, and Samuel slowed our truck to a crawl. We lurched forward and backward and side to side as our tires sank and emerged from the holes. "We call this African massage," our jovial host remarked. We laughed at his joke, but as we bounced along we secretly wondered what kind of hotel could be at the end of such a dark and desolate road in the Tanzanian boonies. 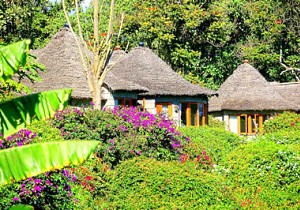 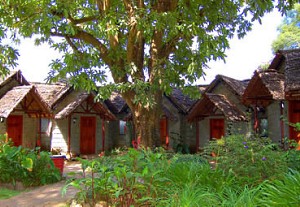 In a few minutes, we turned into a dirt parking lot, exited the truck and walked toward a brightly lighted gate in a long concrete fence. We had arrived at the Serena Mountain Village Arusha, the lodge I had selected for our pre-safari stay. Uniformed employees took our luggage and offered us cool, moist hand towels, fresh juice or champagne and a friendly "Jambo" (Hello).

We breathed a sigh of relief as we stepped into the Mountain Village, the first of many pleasant surprises we would have in Tanzania. The large reception area, lounge and dining room were tastefully decorated in British colonial style, and the main building also housed a TV room, an Internet center and a gift shop.

After registration, we left the main building to be escorted to our room by three porters. At 10 p.m. on that June night, just two weeks before the start of the Tanzanian winter, it was a perfect 70 degrees. Banana trees and acacias dotted the grounds, illuminated with soft uplights. Rooms were clumped in groups of five or six, with circular, concrete walls and thatched roofs, in the style of the Maasai tribe. (Every Tanzanian belongs to a tribe -- there are 120 tribes in total, and the Maasai are perhaps the best known.) Our room was spacious and comfortable, with a writing desk, phone and full bath.

Later that night, as I lay in bed surrounded by mosquito nets, beneath the spinning blades of a large ceiling fan, I knew that everything in Tanzania was going to be different. The greatest adventure of my life was about to begin. 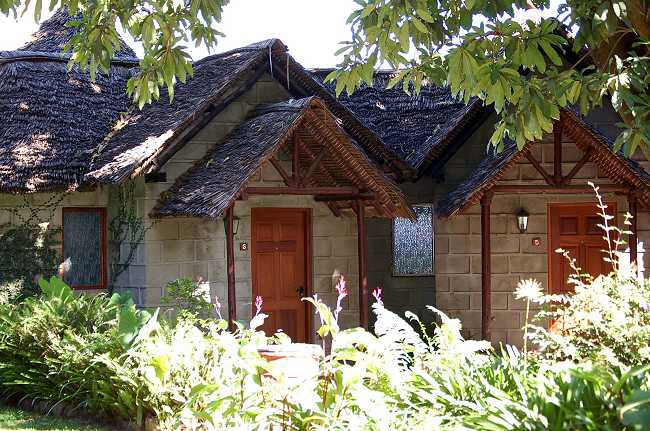 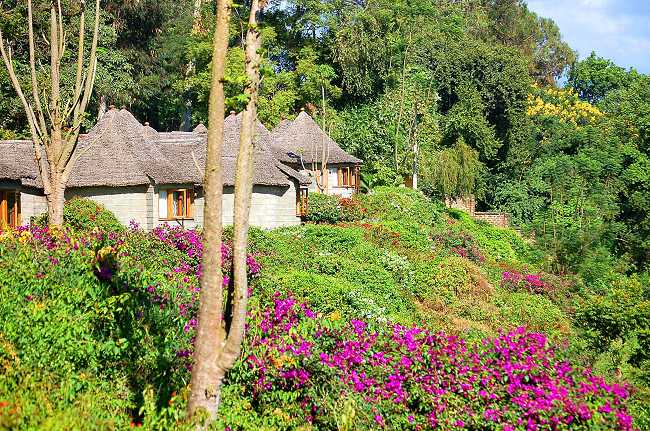 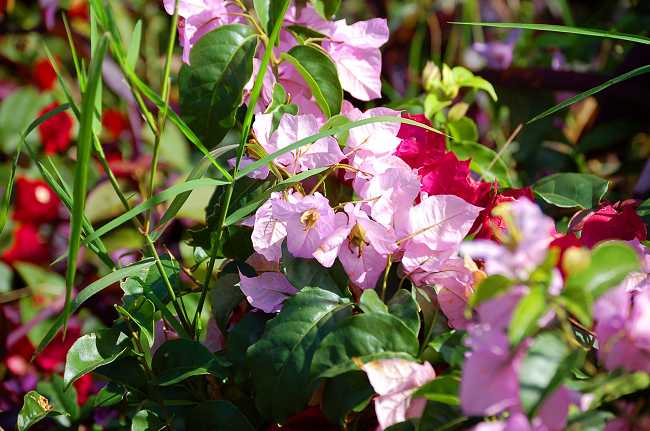 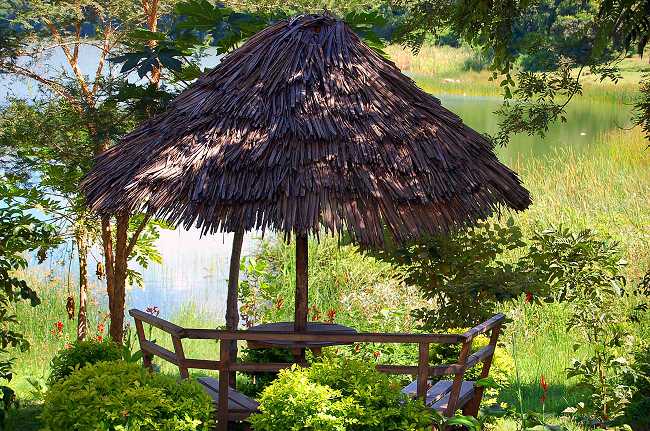 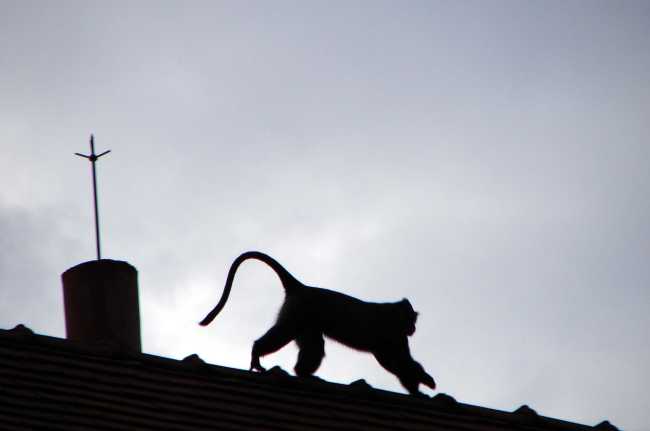 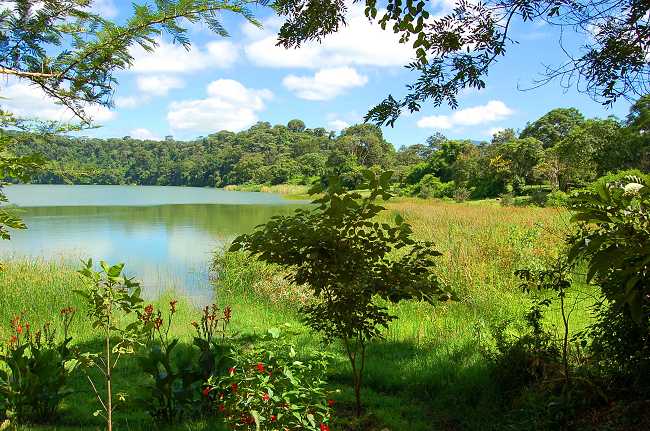 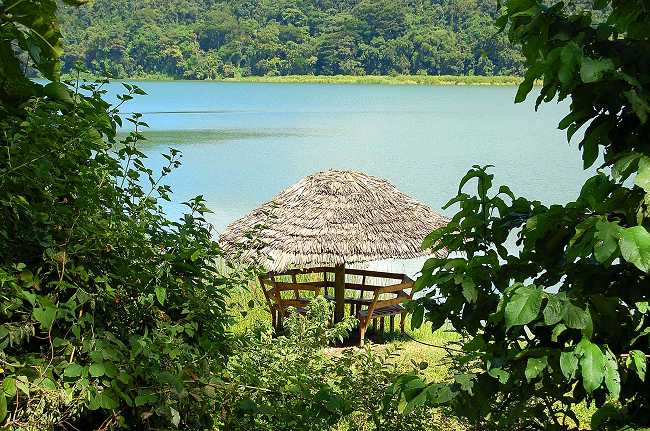