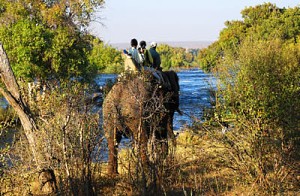 The wake-up call came early in the morning, ending a restless night's sleep well before dawn. Although it's June, it's winter in southern Zambia with overnight lows in the 40s and highs in the 70s, and not a chance of rain. We pulled on an extra layer of clothing to ward off the chill and met our driver in front of the Royal Livingstone Hotel. I'd looked forward to this day since booking the trip, and now it had finally come.

An hour later, in the bush along the Zambezi River, our first game drive was about to get under way. We climbed wooden stairs to a platform 10 feet off the ground, threw one leg over a saddle and settled in behind the "driver" for an elephant-back safari.

Adult African elephants are 18 to 24 feet in length and 10 to 13 feet tall, and the first sensation from the saddle was just how high off the ground we really were. We lumbered away from the camp with huge, silly grins on our faces, finding the ride surprisingly smooth and comfortable.

The elephants had come from Zimbabwe across the river, a mix of orphans and others that had been selected to be culled -- killed -- due to perceived overpopulation. They were safe now, well fed and cared for and allowed to roam free with their young, except for a maximum of two one-hour treks each day. 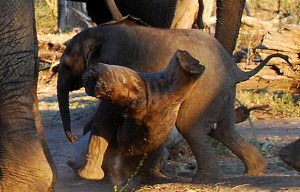 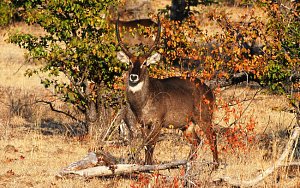 There were five adult elephants in our group, each of which could carry up to two guests plus the trainer, and two adolescent elephants that tagged along for fun. The smallest of the adolescents was less than 3 feet tall and weighed 240 pounds. He was as playful as a puppy, barging through the guests while we stood on the ground just to see us scatter. He went out of his way to climb over obstacles we encountered, and frequently found himself straddling a fallen tree, with front or back legs dangling off the ground.

Elephants eat constantly, from 16 to 20 hours a day, and throughout the ride our elephant munched on leaves, twigs and flowers torn from bushes and trees. There are no lions or other big cats in this park that might bother these animals, so the only concerns were snakes that might spook them or wild elephants that could challenge our dominant male to a fight. To make sure that did not happen, we were accompanied by a guide who walked ahead on foot with a rifle that would be fired only to scare any wild elephant that became aggressive.

We saw no other elephants during our ride, but we did see impalas, waterbucks, eagles, wildebeest and giraffes. The last third of the trek was along the banks of the blue Zambezi, and at one point we waded in to let the elephants have a drink. Crocs and hippos baked in the sun on nearby islands. 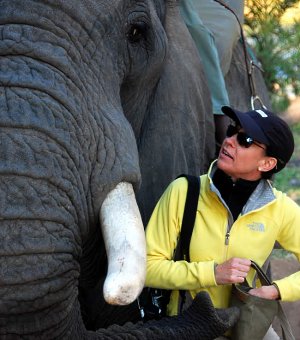 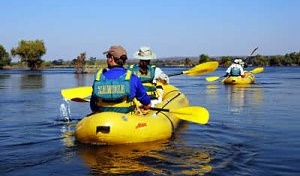 If we had visited a bit earlier, we might have seen the last two white rhinos left in the entire country of Zambia, but they were shot just the week before, by poachers. The female was killed and her horn hacked off, and the male was critically wounded. The rhinos had been guarded 24 hours a day by armed game wardens, and no one seemed to know how this could have happened.

Rhino horns are highly prized in some parts of Asia for their supposed medicinal value, and in the Middle East they are used to make handles for daggers. Despite the pristine beauty of all we saw, one could not help but sense the fragility of the system here and throughout the game reserves of Africa, and the risks posed by greed and desperation and ignorance.

Back in camp, we hand-fed our elephants before saying goodbye and returned to the Royal Livingstone for lunch outdoors in the warm midday sun. But the day's adventure was far from over. By 2 p.m. we were 30 miles upstream from Victoria Falls, preparing to canoe the mighty Zambezi.

The elephant-back safari was an included feature of our customized itinerary, but our canoe trip through the crocodile- and hippo-filled waters of the Zambezi was arranged separately and is only for the physically fit and adventurous. This is not a good place to learn how to canoe, it is not suited for children or the elderly, and perhaps it is not even suited for people in their right minds.

Still, there we were, signing waivers and climbing into inflatable two-person canoes and setting off into a 25-mile-an-hour headwind that produced little waves with whitecaps that were actually blowing upstream. We pointed our canoes toward the Zimbabwe side of the broad Zambezi, paddling strenuously to make any headway at all in a downstream direction. 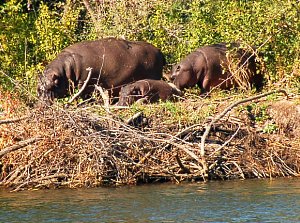 Twenty minutes into our float, we spotted our first hippos. Before coming to Africa, I had assumed that hippos were like extra-wide cows in water, basically harmless. In fact, hippos kill more people than lions or crocs, generally when someone has inadvertently come between the animals and the water, causing them to panic, or between a mother and her young.

We didn't have to worry about the former in a canoe, but hippos can hold their breath for five to six minutes, so I wondered how we would know if we were passing close to a nervous mother just under the surface. Our guide's canoe was always in the lead, and he must have done an excellent job spotting hippos in advance, because we saw many in and out of the water but were never close enough to be concerned. 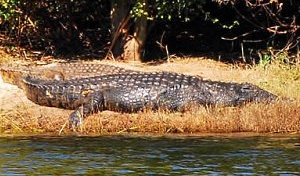 Frankly, it was the crocodiles that had my attention. The first one we saw was small, about 4 feet in length, resting on a root in the shade of a tree that was leaning precariously over the river. We were close before we saw him at eye level, and he watched us pass within 10 yards.

I could almost read his mind: "Mmmmm, I wonder what that one tastes like."

Almost immediately, we saw two more, and they were enormous, more than 12 feet long and sunning just a few feet from the water.

Soon the river took a sharp turn and split into forks separated by islands, and the wind no longer impeded our progress downstream. We were in one of these forks when we heard something we had not expected -- the roar of upcoming white water.

The literature I'd read described our trip as a lazy float downriver, and I certainly would not have brought my family to this crocodile feeding ground if I had known there was a possibility of capsizing. We'd find out later that particularly heavy rains had raised the river and created these conditions, but there was nothing we could do but proceed.

The first rapids were exciting but manageable, as were the second and third, but there was something unusual about the way the forks came together at the downstream ends of islands. The currents seemed to collide more than merge, with some forks apparently deeper than others and some currents actually appearing to run upstream.

I had just noticed this phenomenon when suddenly the front of our canoe spun 90 degrees from its downstream orientation, turning us broadside in the rapids. We paddled furiously, managing to right the canoe against the pressures that wanted to spin us around, but we were caught in an area of churning water, and all forward progress had ceased.

"Paddle as hard as you can," I called out to my wife in the front, "we're stuck." We pounded the water with all our might, marking our movement against a spot on the shore. As we pulled on our paddles we'd move forward a foot or two, but when the paddles were out of the water between thrusts, we'd drop back again.

After several long minutes, we covered the 20 yards to the edge of the whirlpool and escaped its grasp, but our relief was short lived. Up ahead, we could see that one of our canoes had lost its stern paddler. Someone in our party had been bounced from his boat and was swimming with the crocodiles! We spotted a bobbing head being swept downstream, swimming frantically toward the lead canoe. The guide quickly hoisted him out of the water -- intact. 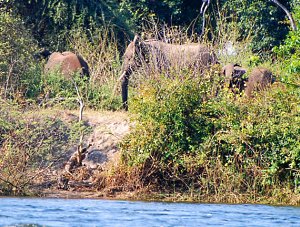 The rest of our three-hour journey was peaceful -- relatively speaking -- as we drifted by elephants, giraffes, baboons and monkeys in the national parks on both sides of the river. The shadows were long by the time we pulled our canoes ashore near two large and amorous monitor lizards and boarded a van for the hotel.

Tomorrow, we will drive west to the border with Botswana, cross the Zambezi by boat (motorboat, I hope) and take a bush plane into the remote and unspoiled Okavango Delta. We will leave the Smoke That Thunders and the gentle people of Zambia with nothing but fond memories.

If you're looking for a place to begin a safari, Victoria Falls is as wondrous as any. But do stay out of the water. 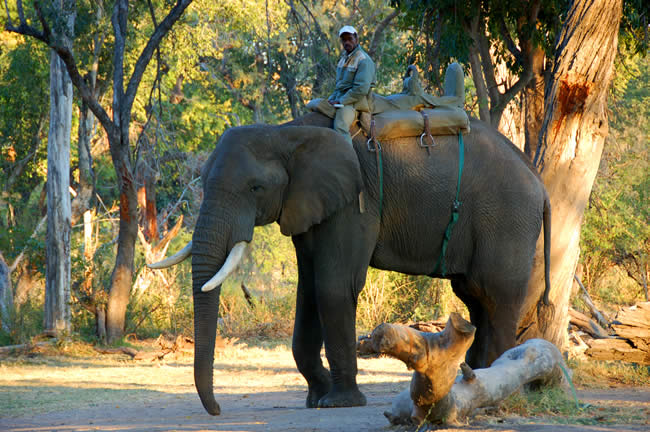 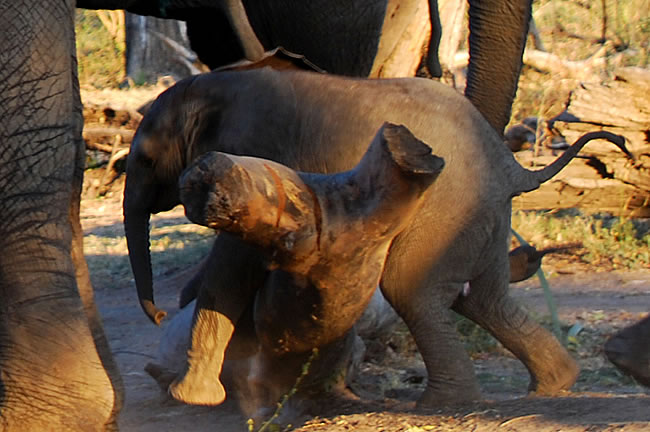 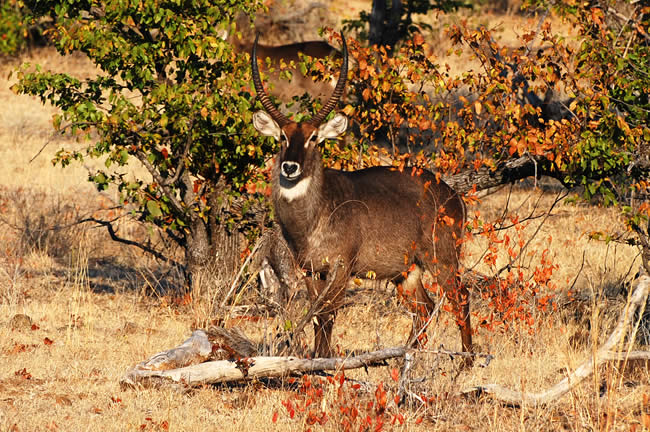 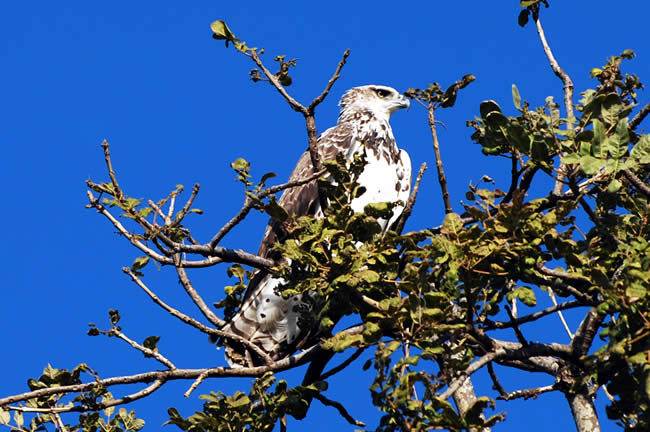 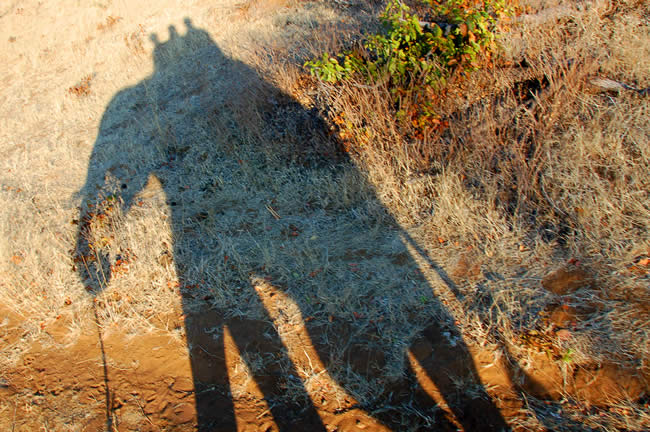 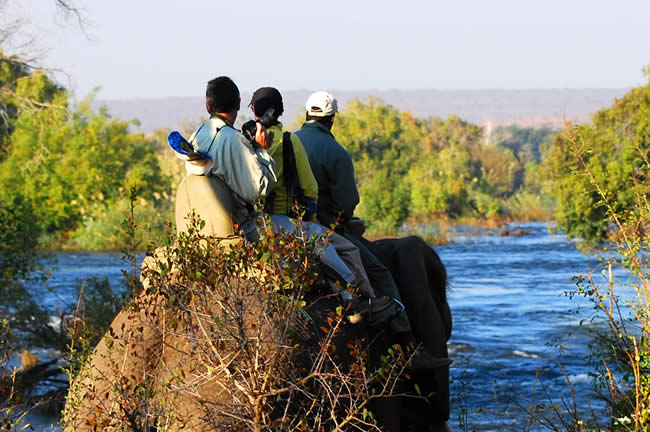 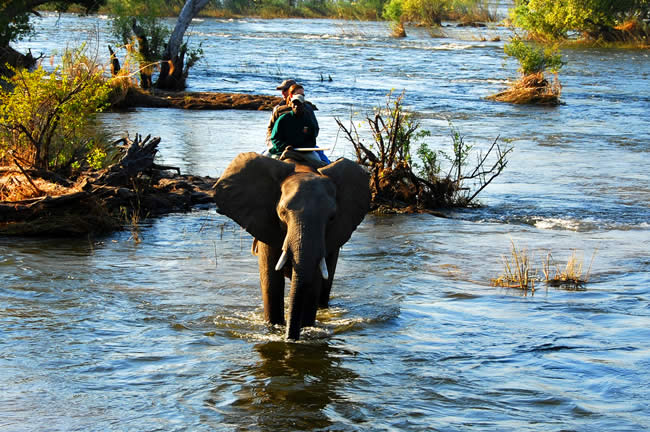 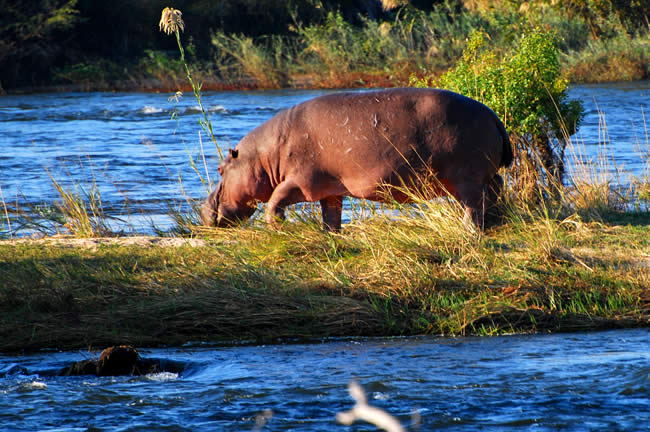 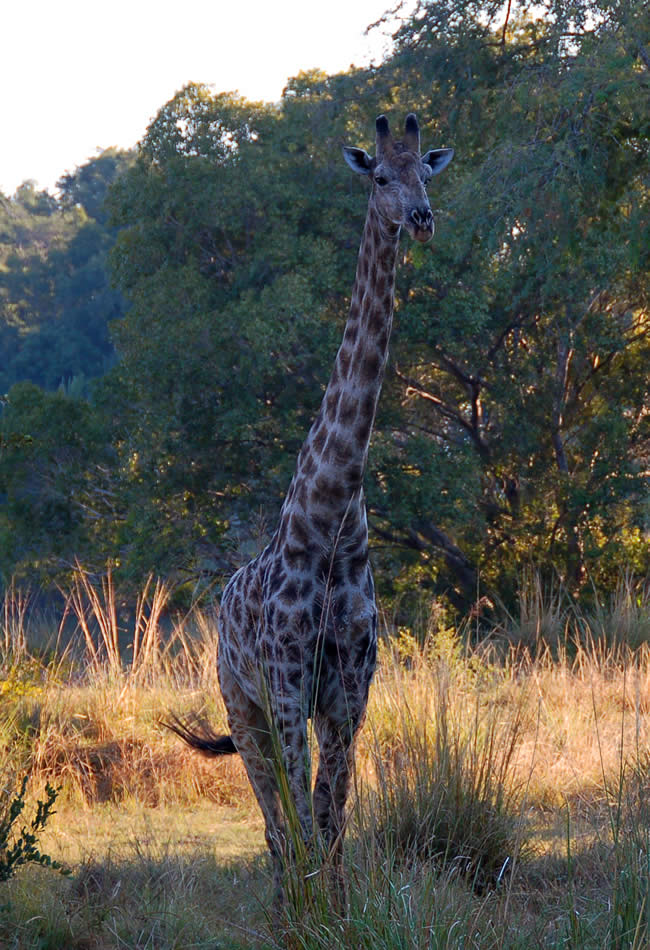 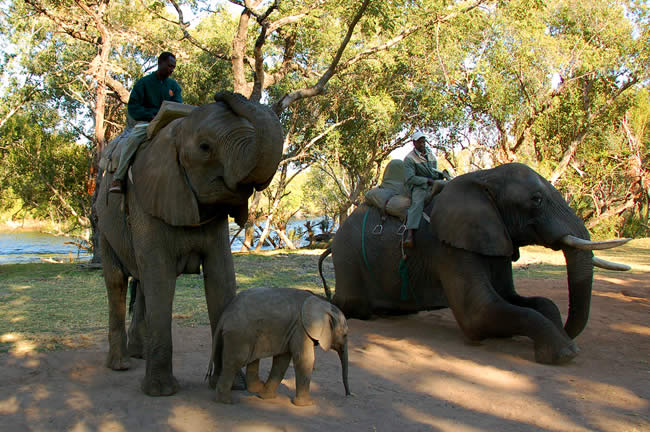 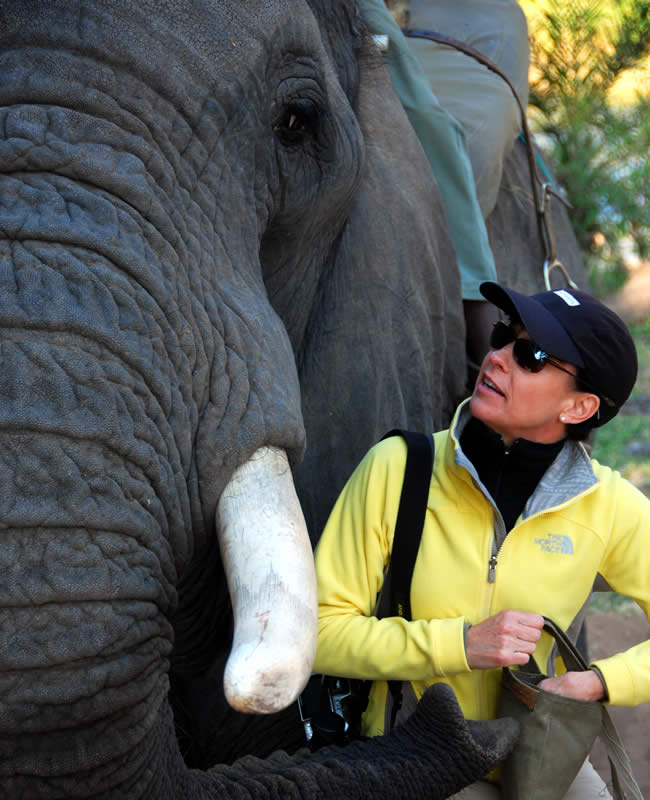 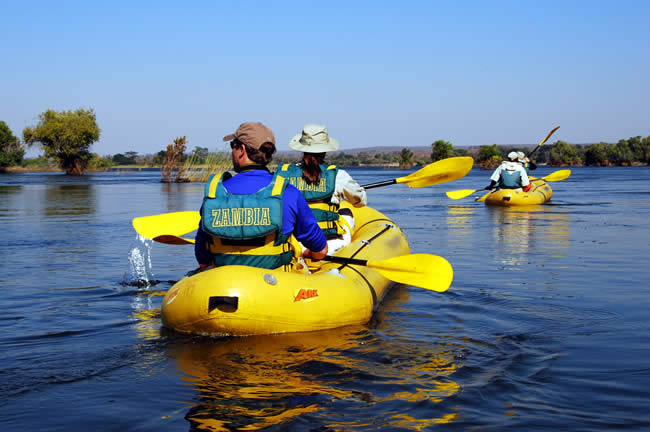 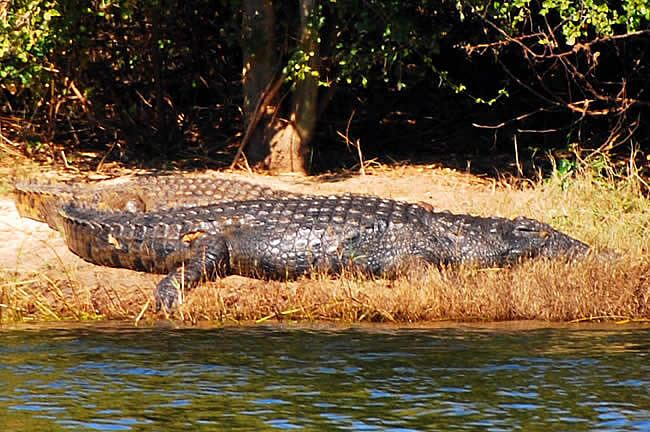 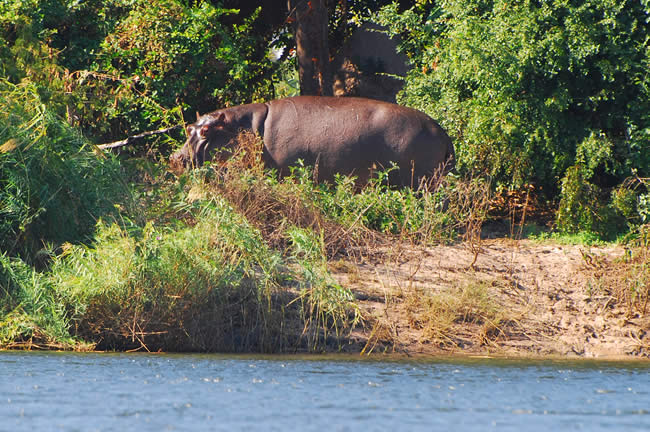 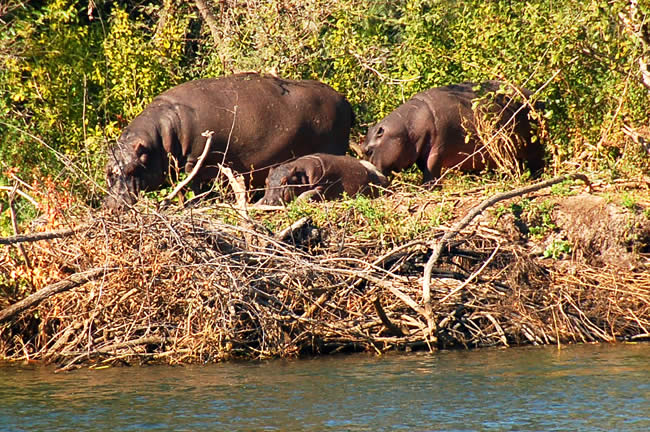 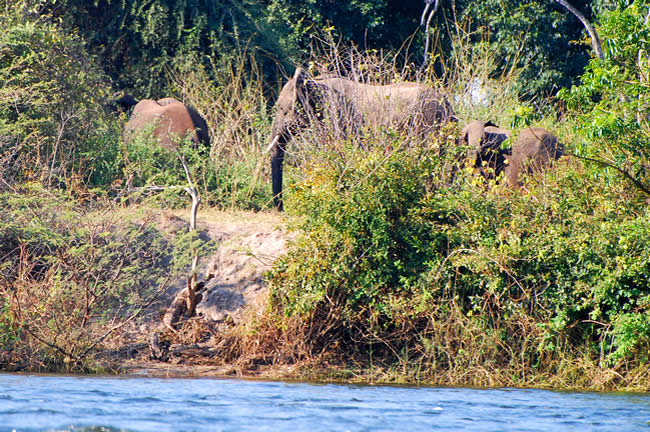 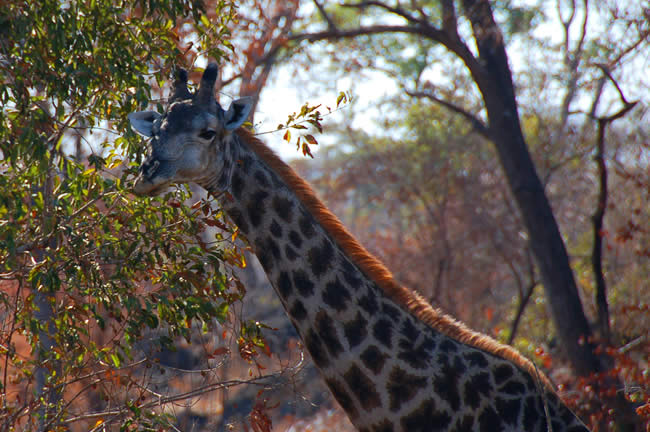 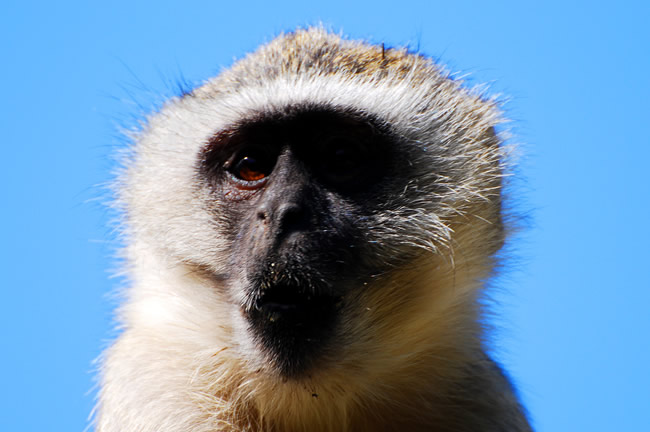 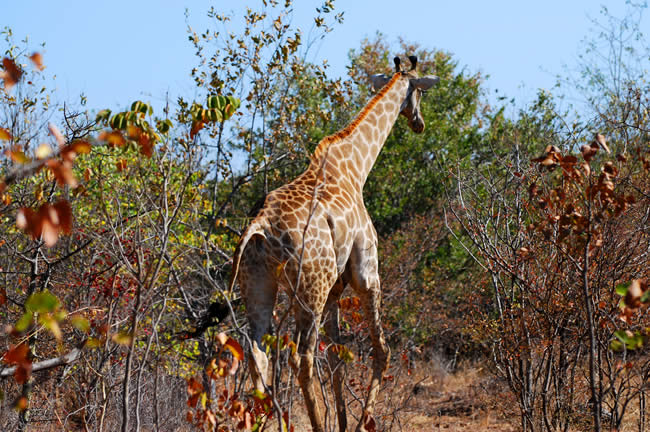 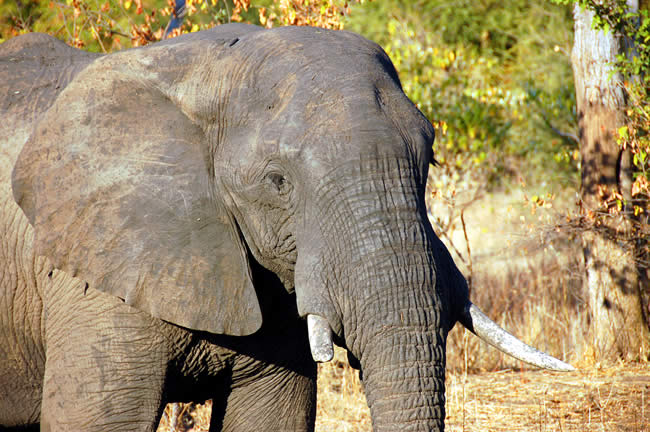 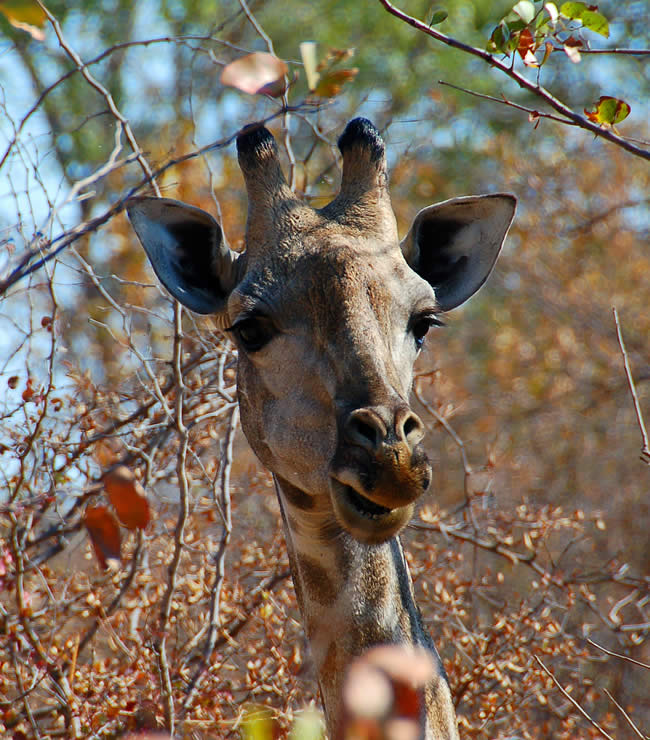