Back to Back on Silversea & Crystal, Part 5: Dubrovnik, Croatia 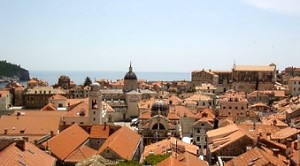 When I told friends and family I'd be visiting Dubrovnik, Croatia, on my Mediterranean cruise, the reaction was mostly raised eyebrows. I had to explain that I'd chosen that particular Crystal cruise itinerary because of the port call in Dubrovnik, and not in spite of it.

Brits and Europeans have long flocked to Dubrovnik for its seaside beauty, hospitable people and low prices, but in America, Croatia is not well known as a vacation destination. The country is more closely associated with memories of the Yugoslavian Civil War, which lasted from 1991 to 1995.

Situated on the southern coast of Croatia, barely 100 miles across the Adriatic Sea from the coast of Italy, the historic town of Dubrovnik seemed far removed from the center of that conflict. But this shimmering tourist mecca was symbolic of Croatia's appeal to, and connection with, the western world, and eventually it was that connection itself that made the town a target. 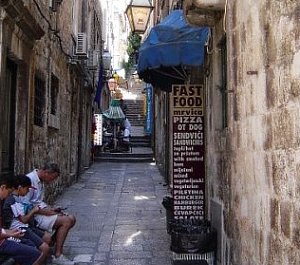 War came to Dubrovnik before dawn on October 1, 1991. A flash of light from an exploding shell, a low boom that rumbled across the town. The children of this undefended village woke to find their innocence gone.

For more than three years, death fell indiscriminately from the sky. From their perch on a hill overlooking the medieval Old Town, Serbian and Montenegrin soldiers of the Yugoslav Army lobbed shells at entirely civilian targets, destroying homes, schools, churches and factories.

On the second floor of Dubrovnik's Maritime Museum, near the door, a handful of photos taken on December 6, 1991, tell the story of the darkest day of the siege. Men crouched in the shadow of a stone archway, staring out at a town enveloped in smoke, as pleasure boats burned and sank in the harbor. 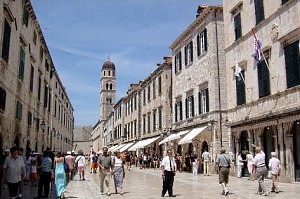 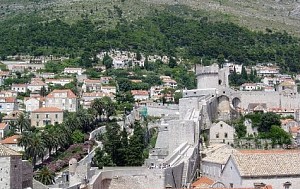 But the people of Dubrovnik did not surrender that day, or during all the months of shelling that followed. And when the final shell fell in the summer of 1995, killing a young couple on the beach, the survivors emerged to rebuild what had been destroyed.

Nine years later, the physical signs of the siege are gone, and the officers in charge of the shelling have long since been arrested and prosecuted for war crimes. The people of Dubrovnik have done their best to put it all behind them, though the mutual distrust that has lingered so long between Croats and Serbs has been passed to a new generation.

The Old Town of Dubrovnik has been restored to the beautiful state that earned the nickname, "Pearl of the Adriatic". Tourists are back in record numbers, and the marble main street hums with the sounds of commerce. An international crowd fills the sidewalk cafes, dining on fresh seafood and sipping local brandy.

The charming village is surrounded by perfectly preserved stone walls that date from the 12th century and rise to heights of 75 feet in some places. You can walk the entire circumference of the city on these walls, which offer great views of the town, the old harbor, and the red-tiled homes, stores, churches and cafes below.