By the time Christopher Columbus landed in the New World in 1492, the Incas of South America had established an empire that covered half of the west coast and a large section of the Andes Mountains, incorporating parts of modern-day Peru, Colombia, Ecuador, Chile, Bolivia and Argentina. Some of the tribes ruled by the Incas had been conquered and some had been peacefully assimilated.

Columbus' discovery set off a wave of Spanish expeditions to the Americas, one of which brought Francisco Pizarro to the island of Hispaniola, and later, to Panama.

Word came of riches beyond the imagination to the south, and Pizarro made a pact with a soldier (Diego de Almagro) and a priest (Hernando de Luque) to explore and conquer the region and divide the spoils equally between them. The three convinced the governor of Panama to finance their forays into South America.

The year was 1524, the beginning of the end for the Inca Empire. 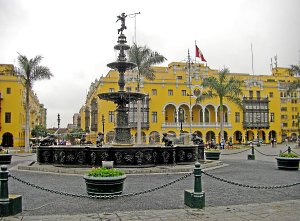 We left the calm waters of the Galapagos and returned to Quito, Ecuador, for the final night of our 10-night Celebrity vacation. The next day, most of the passengers from the cruise headed north to the U.S., but our small group boarded a 2 ½ hour flight south, to Lima, Peru.

We were in the neighborhood anyway, so we had decided to push on to Machu Picchu, one of the man-made wonders of the world.

Celebrity's Galapagos cruises can be combined with an optional three-day add-on trip to Machu Picchu. We wanted to stay longer and enjoy more of Peru's fascinating sights and attractions, so we booked a seven-night itinerary with three nights in Lima, three in Cuzco and one near Machu Picchu.

Lima is a city of more than 9 million people, one-third of the total population of Peru. It is home to numerous historical sites and museums, a beautiful coastline with cliffs leading down to wide, sandy beaches, many fine restaurants and a traffic free-for-all that reminds me of Cairo.

Except for the summer months of December through March, Lima is covered with clouds almost continuously, and we touched down on a cool, overcast morning. We checked into the gracious and welcoming Country Club Lima, one of the city's top-rated hotels. 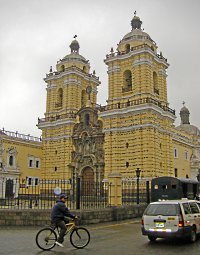 Lima's historic center features numerous examples of colonial-era architecture, including the Cathedral of Lima and the Monastery of San Francisco. Construction on the former started in 1535, and though the structure has undergone earthquakes and numerous repairs and transformations, it still retains its colonial style and façade.

The Monastery of San Francisco was completed in 1774, at a time when many believed that being buried in a monastery made it easier to get into heaven. Financial supporters were allowed to be interred in the catacombs beneath the monastery, but space was scarce. After several years, the skeletal remains were uncovered and moved to ossuaries -- rooms stacked with the bones of hundreds of people -- to make room for more burials.

We walked by these ossuaries in the cool and dimly lit catacombs, peering in at the bones and skulls. What a job it must have been to work in those claustrophobic quarters by torchlight, in the suffocating smoke and stench, when burials and exhumations were still under way.

We stepped back outside, enjoying the open spaces, but not for long, for our next stop was the Inquisition Museum. This museum is housed in the same building that was home to the Peruvian Inquisition, which lasted from 1570 to 1820.

One of the darkest imports from Spain, the Inquisition was officially tasked with eliminating heresy, blasphemy and witchcraft. The indigenous people were generally not subject to prosecution since they were considered by the church to be "gente sin razón" -- individuals without reason. The primary targets were Jews and Muslims.

We descended into the dungeon of the museum to see the terrifying, tiny cells carved out of rock where prisoners awaited trial or punishment in total darkness, as well as a room filled with torture devices used to extract confessions and conversions. 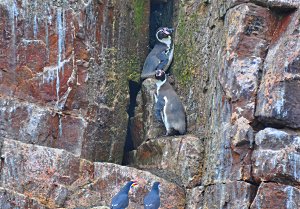 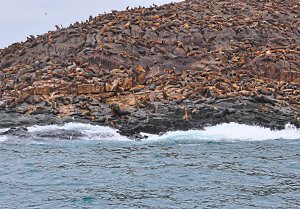 After a day spent exploring the history of Lima, we were ready to visit the wild and little-known Palomino Islands, just off the coast. The islands are fed by the same Humboldt Current that goes all the way to the Galapagos, but it's colder, rougher and richer here, 1,300 miles closer to the source in Antarctica.

In the Palomino Islands, the Humboldt supplies the fish that support an incredibly dense population of sea lions and birds, and sustains the Humboldt penguins, which are larger and healthier in appearance than Galapagos penguins.

The first half hour of our boat tour from the port of Callao was calm, but as we left the protected waters between the mainland and the Palominos and rounded one end of an island, the wind picked up and swells raised and lowered our boat. The farther we went, the rougher the seas became, and the sky filled with birds.

Soon the waves were slapping the rocky shores with big explosions of surf, flat-topped rocks jutted from the sea, covered with seabirds or penguins or both, and an entire island dotted with sea lions came into view.

Our group of nine had paid to swim with the sea lions, but due to the rough seas and cold water, only two of us went in. A dozen of these gentle creatures came out to greet us, their heads bobbing next to ours on the waves. I doubt the place has changed much since the days of Pizarro.

Tomorrow, we leave for Cuzco, high in the Andes Mountains, a destination in itself and the gateway to Machu Picchu.

Cuzco was once the center of the Inca Empire, the main obstacle standing between Pizarro and the riches of the New World.