The Stretching of Enchantment of the Seas

Most cruise ships built today offer far more space, entertainment options and amenities than ships built 15 or 20 years ago. The constant stream of innovations creates excitement and attracts new travelers to cruising, but all the bells and whistles on new ships can make older, smaller ships in the fleet look a bit dull by comparison.

Royal Caribbean leads the industry in innovative new ship features, including ice skating rinks and rock climbing walls. During the summer of 2005, the line opted for an extreme makeover of the then-eight-year-old Enchantment of the Seas, designed to bring her to the cutting edge in terms of size and amenities. The ship was sliced in half and a new midbody section was inserted, a process cruise lines refer to as "stretching". Here's a look at how it all came together.

Long before the Enchantment of the Seas arrived in the shipyard to be stretched, a team of engineers and technicians planned every move that would happen during the two months the ship would be out of service. Every pipe, duct and cable to be cut (and later reconnected) was listed.

Finnish ship-building giant Aker Finnyards laid the keel for the midbody in Turku, Finland, and construction began on the 14-deck-high, 73-foot-long section. When completed, the 2,500-ton midbody was floated to the Keppel Verolme shipyards in Rotterdam, Holland, on a barge. That must have been quite a sight as it cruised along the Baltic Sea!

At Keppel Verolme, the midbody and the Enchantment of the Seas entered a specialized dock, and the water was drained. The aft of the Enchantment of the Seas came to rest on traditional dry-docking blocks, while its fore rested on massive gliding skids, capable of moving forward once the cruise ship was cut in half. The new midbody section was situated beside the ship exactly where it was to be inserted, resting on hydraulic jacks that held it eight meters off the dock's floor.

Engineers determined the ship's "cutting zone," then the cabins and public spaces in that area were emptied down to the bare steel framework. Over a 6-day period, the ship was sliced in half with burners, and the fore moved forward on the gliding skids. The midbody was inserted between the original sections, and the fore slid backward into place. It took two weeks to weld the body back together and reconnect the wiring, pipes and cables. 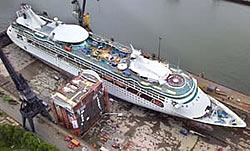 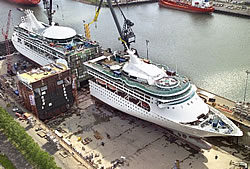 Among the additions to the Enchantment of the Seas during the stretching and refurbishing process were 151 staterooms, gravity-defying bungee trampolines overlooking the ocean, a new Splash Deck with interactive fountains and water jets, two new suspension bridges that span a revitalized pool area, Boleros Latin lounge, Chops Grille steakhouse, and Latte'tudes coffee shop.

At a cost of $55 million to $60 million, the final result is a longer, more spacious Enchantment of the Seas that is better equipped to meet the increasing demands of today's competitive cruising industry (click here for dates and prices). That sounds like a lot of money until you consider that Royal Caribbean's Freedom of the Seas, which debuted in June of 2006, cost nearly $800 million.